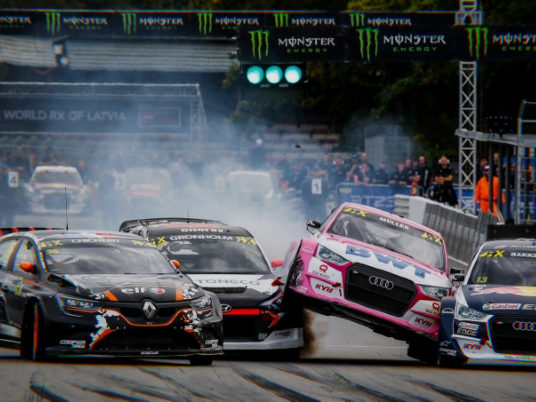 The fifth and sixth rounds of the 2020 FIA World Rallycross Championship took place at the Bikernieki Sports Complex Circuit in Riga, Latvia, where Johan Kristoffersson and Mattias Ekstrom claimed the winners’ trophies. But that doesn’t tell the whole story.

“What a fantastic result. We had a good day on Saturday, but we struggled a bit with the tyres, so it was good to get a P2 and both cars in the final. We had a good debrief overnight and really put our heads together to try and find a setup to try to manage the tyres as well as possible. We worked late, and today it paid off. We had the pace in the morning and through the day, the semi-final went just as we planned, and then in the final, I was a little curious about how Robin would get on because we didn’t have as many new tyres for him as we did for Mattias, but it was such a nice feeling to get both cars on the podium. I’m almost happier for Robin than Mattias because we have worked so hard with Robin and he’s driven so well but we’ve never had the last luck to be on the podium. Now finally he could step up there and it’s a huge relief for him. It’s so nice to have two top drivers in the team and it’s fun to be looking at the points in both championships. There’re many races left still and I guess I need to call Mattias on Monday and try to discuss what we can do in the future. Hopefully, CUPRA and ABT can let us have him back again.”

“I feel good. Two more races were done and not so many points left to fight for. In the final on Sunday I had a good launch, but so did Mattias. Then there was not much more to do. I picked up as many points as I could, without winning, so I can’t be disappointed, especially because I’ve only lost 14 points from six races.”

“In general this weekend I’m extremely happy with what we delivered and the results we got. With the pace we had and the launches we had, this was the maximum we could achieve. The team hasn’t made a single mistake all weekend, and I haven’t made any mistakes on track, so we extracted everything we had. That said, we also want more, we want to be able to fight for the top step on the podium. To do that, we need to take one more step with the whole package that we have. There have been good signs but we need to put it together.”

“This weekend in Riga was difficult and sometimes even a frustrating one, but I know that everyone in the team did their best and I am proud of them. For sure we would have wanted a better result, but races in Riga prove the level of the sport and that we have to keep working and improving throughout the whole season.”

“Round six was really a day about consistency for us in Riga and the target was the podium for sure. I felt we were strong in Q1 and Q2 especially, then we struggled a bit in Q3, got safely to the semi-finals and saw a lot of action there. First following the start which had us pushed out but then I caught up to Scheider twice and knew I had the opportunity to overtake him. I saw him break a little late to defend and I took a wider line, cut back to then take the inside line. Then I just felt one big punch into the front side of my car that changed its direction entirely and hit the barrier on the left doing 120km/h at the time. There were parts everywhere and I literally just closed my eyes hoping that Marklund and Doran would avoid me. At that speed, you never know what can happen. The track medical team did a great job and the Riga hospital did a lot of tests on me, which I really appreciate. It’s moments like this that you so appreciate the work we’ve done on our safety equipment in the Megane, the seatbelts, our hybrid device, the helmet and so on – you sometimes take it for granted but now I’m just happy that we use safety equipment that is well proven and of great quality.”

“We’ve been working very hard on the car this weekend and everyone on the team had to absolutely put their everything in to try and mitigate some of the niggles that already reared their heads in round five. We started to pick up some pace in the end but it wasn’t quite strong enough. The semi-final on Sunday had us finish in 4th due to Scheider’s disqualification, however, as a result of the race has been red-flagged, the previous lap’s standings stood and Andreas would’ve got the grid spot and of course was unable to so Kevin Hansen took the spot in the final ahead of me. A close call to the final but it wasn’t to be today and the priority is that Andreas is ok.”

“Great come back on Sunday after a difficult Saturday. Unfortunately, we got disqualified in the semis after contact with Andreas Bakkerud. So, no Final due to this. It was hard racing but for sure not on purpose, Bakkerud clipped my rear wheel and broke his suspension and went into the wall! I am sorry for him and I hope he is ok but for sure I see the Stewards decision as totally wrong! Thanks to the team, you worked your ass off this weekend.”

“As an athlete, for sure it’s tough to turn up when you’re not fighting for the top but motorsport is not easy, and it was important to get this weekend’s runs to gather enough information and test the changes made ahead of our pre-Barcelona testing. I’m really grateful to the mechanics and the rest of the team, they just keep pushing on despite frustrations as we try to learn as much as possible in what is an incredibly short, hectic season this year. I’m really happy to see the work I’ve put in over the off-season on my own driving style come through as we can see it’s got much cleaner. Now I hope we make some progress ahead of Barcelona to see it come together.”