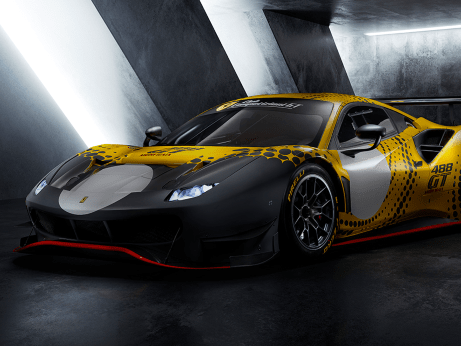 The Ferrari 488 GT Modificata is a limited edition car that incorporates the skills and technologies developed for the 488 GT3 and 488 GTE, transcending the limits imposed by technical and sporting regulations to exploit their full potential. The 488 GT Modificata is exclusively for use on the track during track days and at Ferrari Club Competizioni GT events.

The car’s name already includes the word “Modificata”, which in Ferrari jargon means designs that have been evolved for better performance.

When aerodynamic efficiency meets sophisticated mechanics, only the Nordschleife circuit can put the resulting alchemy to the test.

In defining the vehicle dynamics of the 488 GT Modificata the engineers opted to use the suspension from the 488 GTE which competes in the FIA WEC World Championship.

Produced in very limited numbers, this car is for sports customers who compete at the wheel of a Ferrari in the GT championships.

The 488 GT Modificata is a perfect synthesis between the 488 GTE that competes in the Endurance World Championship and the 488 GT3, queen of GT racing.

The 488 GT Modificata will be admitted to Club Competizioni GT events, which are carving out an increasingly prominent place among Ferrari’s track activities.