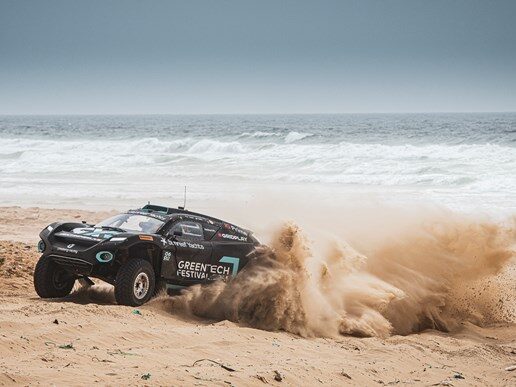 23 August 2021, London: In just five days’ time, some of the biggest names in motorsport will partake in the first motorsport event to ever be held in Greenland – Extreme E’s Arctic X Prix – which takes place  on 28-29 August in Kangerlussuaq.

After a close fought weekend of racing in Dakar, Senegal, RXR took victory for a second time following the teams stand-out performance at the Desert X Prix in Saudi Arabia in April. The driver pairing of Swede Johan Kristoffersson and Australian Molly Taylor are sitting pretty at the top of the table on 71 points. Lewis Hamilton’s X44 is in second spot with 57 points and Jenson Button’s JBXE sits third on 44 points. With only seven points separating the remaining six teams, it really is all to play for as the series enters round three of Season 1.

Alejandro Agag, Founder and CEO of Extreme E, said: “Greenland is an incredible place and I’m delighted to be putting on the first ever motorsport event in the country. Huge credit to the team behind the scenes, it really is testament to the hard work of everyone involved, as putting on an event here, in the remote Arctic, is no easy feat.

“With our updates to the sporting format, we are going to see even more exciting racing and our first five-car Final of the series, offering all teams a chance to make the concluding race of the weekend.

“Although the reason for racing in Greenland is much bigger than putting on a fantastic show, it is about highlighting the issues faced by the island including ice melt leading to global sea level rise. We really are at a tipping point in the climate crisis and I’m looking forward to hearing from members of our esteemed Scientific Committee while in Greenland not only about the issues, but the solutions on offer, including electric vehicles, one of the key parts of Extreme E.”

Nico Rosberg, Founder of Rosberg X Racing said: “We have incredible momentum coming into the Arctic X Prix and I couldn’t be prouder of the team’s performance in the first two races. However, we do not take anything for granted and myself and the entire team are motivated to continue the hard work. The race is in a spectacular location and I am as excited as any fan to watch our ODYSSEY 21 race car compete in such an extraordinary setting as Greenland.”

Kangerlussuaq is situated in the west of Greenland and is home to the once mighty Russell Glacier, which will provide the backdrop to an epic weekend of wheel-to-wheel racing. This area was chosen as it highlights the climate crisis, and part of the course itself was previously occupied by the glacier, but has sadly melted due to accelerated temperature rise.

Measuring eight kilometres, the course will provide a very new challenge to drivers with the surface made up of glacial sediments, rocks and sand dunes, although not like those seen in Saudi Arabia. The course is wide open in areas allowing for various racing lines, as well as technical sections around various rocks. The full layout will be revealed.

Not only will Greenland provide new terrain, the X Prix will also follow a slightly updated format, including an opportunity for all teams to progress to the Final making it a five-car battle, as well as new routes to Semi-Finals and intermediate classification points awarded after qualifying sessions.

Qualifying will take place on Saturday 28 August – one session in the morning and one in the afternoon – with each team completing two laps of the course, one per driver with a driver Switch. The times recorded across the morning session will equate to classification points meaning first place receives 9, second place 8, third place 7 points and so on. The same then happens in the afternoon with classification points awarded on the same scale.

The combined total of these classification points provides the intermediate standings, which is based on points instead of times as seen in Saudi Arabia and Senegal, meaning a fairer opportunity for all teams to progress, particularly if a poor time or DNF for example is recorded in one session. These points do not equate to championship points – they are awarded in the same way as previous rounds.

Races will take place as follows:

The ‘Super Sector’ – a part of the course where the fastest driver in that section over the weekend will earn five points for their team – will continue to be a fixture for the Arctic X Prix and SEGI TV Chip Ganassi Racing’s Kyle LeDuc will be looking to take these points again. In addition, teams can also benefit from a HyperDrive boost available to each driver on each lap of the race. Activated when the driver presses a button on the steering wheel, they will enjoy an extra push of continuous power for a few seconds.

The nine teams and 18 drivers are as follows:

Teams are able to select which driver goes first in Qualifying 1, with choices kept secret until the driver gets behind the wheel. For each session after this, the first driver must alternate.

The GridPlay vote will open at 1100 CEST on Wednesday 25 August and close at 1300 CEST on Sunday 29 August offering fans the opportunity to vote for their favourite team, and in turn influence the starting line-up for the Final.

This vote has impacted the grid in both the Desert and Ocean X Prix events, as the teams that don’t make the Final can gift their votes. This meant Andretti United Extreme E and Veloce Racing, in Saudi Arabia and Senegal, respectively, were able to select favoured starting positions.

The voices of the series

Lead commentators Jennie Gow and Andrew Coley will continue to talk fans through all the action from the London studio, whilst gaining insights from the Extreme E paddock in Greenland, which features some of the biggest names in motorsport.

Think climate change, think Greenland. The Arctic island is at the heart of the climate crisis, particularly its melting ice sheet. Extreme E has consulted with its Scientific Committee throughout the organisation of the Arctic X Prix, and three of its members – Professors Peter Wadhams, Carlos Duarte and Richard Washington – will all be in Greenland with the series hosting various workshops and continuing with their own Arctic research.

The workshops will focus on this event in Greenland being the ‘Tipping Point’ the world is currently facing, from climate change in the Arctic and the melting of the Greenland ice cap to emerging from a global pandemic, and leading action on the many challenges. The Arctic X Prix acts as a tipping point bringing together a variety of people and organisations committed to climate action.

Extreme E has partnered with UNICEF, the world’s leading children’s organisation, for its Greenlandic Legacy Programmes to empower young changemakers – around 3,600 young people – in the country by reimagining climate education in Greenland, helping children understand and address the climate related issues which are putting them, and future generations at risk.

Extreme E and its independent Scientific Committee composed of leading climate experts from Oxford and Cambridge Universities has worked closely with UNICEF UK and UNICEF Denmark in Greenland to support UNICEF’s work on climate change education, helping children across the country understand and address the climate related issues which are putting them, and future generations at risk.

Working with climate change experts including Professor Richard Washington, who is part of Extreme E’s Scientific Committee, UNICEF has developed educational resources designed to further the understanding of both teachers and children on climate related issues and the ways in which they can help to address them.

The resources have been created and they will be taught to the children of Greenland during Climate Week in September 2021.