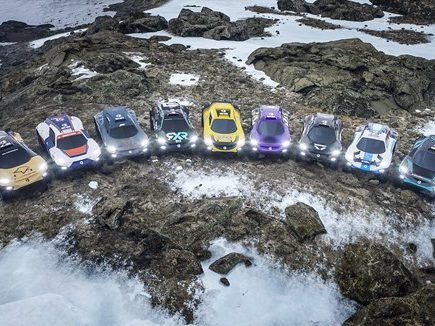 In keeping with the series’ sustainability goals, the launch was virtual and all the teams joined remotely from their various locations including the UK, Germany, Spain, America and Asia as they came together to unveil their car liveries using CGI animation.

Extreme E’s three key pillars – electrification, environment and equality – were highlighted throughout the presentation, which provided details on the championship’s sustainability goals, Legacy Programmes and commitment to raising awareness of the climate crisis.

Extreme E Founder and CEO Alejandro Agag hosted the event, alongside presenter Nicki Shields, and delivered the series overview, including a revised Season 1 calendar which now incorporates a season finale in Argentine Patagonia.

Alejandro Agag, Founder and CEO of Extreme E, said: “Our Virtual Launch has been an incredible format to unveil our Season 1 calendar and the team cars, whilst also refining our virtual experience capabilities – a key theme of Extreme E.

“Our team has been working really hard behind the scenes and despite the pandemic and the challenges it has provided, we are on track for our first race in March 2021. The series has gained massive momentum with no less than two Formula One™ World Champions signing up with their own teams alongside other powerhouses in the motorsport world, and there is much more to come as we announce drivers in the coming months.”

On the new race location, Alejandro adds: “We are delighted to confirm that Patagonia in Argentina will feature in our Season 1 calendar, and it will certainly make an incredible race experience for teams and viewers alike. However, of course there is a far more serious reason why Extreme E has chosen to visit Tierra del Fuego. Glacial retreat is one of the devastating effects of the global climate crisis, and unless we act now these incredible places will no longer exist.”

Joining Greenland, Senegal, Saudi Arabia and the Brazilian Amazon, Extreme E will race in Patagonia, officially replacing Nepal in the season 1 calendar. The decision to change locations, and delay the start of Season 1 by six weeks was made due to a combination of the COVID-19 pandemic affecting series preparations, coupled with the additional complexity of getting to the proposed race region in Nepal, though series organisers remain committed to a visit in future Extreme E Seasons.

The new Season 1 finale will take place in Tierra del Fuego in Patagonia, which will play host to the championships Glacier stage in December 2021.

Extreme E is a radical new racing series, which will see electric SUVs competing in extreme environments around the world which have already been damaged or affected by climate and environmental issues. The five-race global voyage highlights the impact of climate change and human interference in some of the world’s most remote locations and promotes the adoption of electric vehicles in the quest for a lower carbon future for the planet.

To minimise local impact, Extreme E races will not be open to spectators, with fans instead invited to follow the action through live TV broadcast, and on social media.

The St. Helena, a former passenger cargo ship, has undergone a multi-million Euro refit to minimise emissions and transform her into Extreme E’s operations hub. The ship will be used to transport the championship’s freight and infrastructure, including vehicles, to the nearest port, minimising Extreme E’s footprint, as well as being used to facilitate scientific research through its on-board laboratory.

Extreme E is also pioneering hydrogen fuel cell technology which will enable its race fleet to be charged using zero emission energy. This innovative solution from AFC Energy uses water and sun to generate hydrogen power. Not only will this process emit no greenhouse emissions, its only by-product will be water, which will be utilised elsewhere on-site.