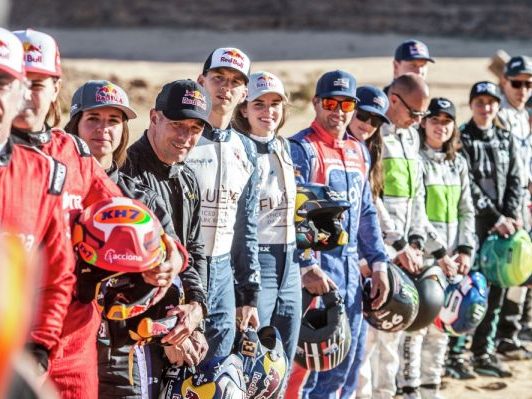 27 May 2021, London: The stage is set for Extreme E’s second stop – the Ocean X-Prix – on its inaugural season calendar on 29-30 May at the stunning venue of Lac Rose, Senegal where it will again be teaming up with leading short video platform, TikTok to produce outstanding digital live content to further bolster the series’ already impressive social media offering.

Extreme E’s broadcast of its debut event in Saudi Arabia in April pulled in a massive 18.5 million views across its TikTok content. The championship also acquired 60,000 new fans after Little Dot Studios activated the partnership using their vertical video expertise on behalf of the series.

As part of the initial collaboration, Extreme E and Little Dot Studios created an exclusive 90-minute production which captured 360,000 views on Extreme E’s TikTok account during the debut weekend giving an a behind-the-scenes look at the personalities involved in this innovative sport for purpose series.

For the forthcoming Ocean X Prix in Senegal on 29,30 May, the parties will be building on this already proven format but with the bonus addition of the weekend’s final races also being made available live on TikTok on Sunday May 30 at 15:00-17:00 (BST) in markets such as Russia, France, Sweden, Norway, Finland, Denmark, Poland, Romania, Hungary, Israel, Saudi Arabia, Egypt, UAE, Morocco, Kuwait, Tunisia, Lebanon, Oman, Iraq, Qatar, Jordan, Mauritania and Bahrain.

Additionally, the ‘behind-the-scenes’ live-streams, which proved to be so successful at the Desert X Prix opener in Saudi, will also be live from Lac Rose on:

TikTok users can access Extreme E content through the official handle @extremeelive and through TikTok’s Discover page in the participating regions.

Ali Russell, Chief Marketing Officer at Extreme E, said: “The viewing numbers from our first event – the Desert X Prix in Saudi Arabia – were beyond phenomenal and I’m so thrilled that we were able to reach so many people with our unique championship broadcast.  TikTok is massive, and we know that over 60 per cent of its audience are ‘Gen Z’ers’ – the age group that is most concerned about the climate crisis – so to be able to fully engage with them like this is brilliant for our sport for purpose series.

“It’s fantastic that we can now add live streaming in addition to the races and behind-the-scenes coverage from our Ocean X Prix. This is an absolute gamechanger for our sport and I can’t wait to share Extreme E’s thrilling action and the stories of our championship from Senegal on 29, 30 May.”

Yannis Ioannidis, Global Business Development and Strategic Content Partnerships at TikTok said: “We are thrilled to expand our collaboration with Extreme E to include live-streaming of the final races as shown on TV in the agreed countries. TikTok Live is the ultimate destination for exciting live-streaming content and this new partnership with Extreme E will give our mobile-native community of users access to premium racing content for the first time ever.”

The series is fully focused on delivering its second event at Lac Rose in Dakar, Senegal which takes place from 29-30 May. Besides TikTok, the action will be available in 180 countries through 75 broadcasters including FoxSports in the USA, ITV,Sky Sports, BBC and BT Sport in the UK, Teledporte in Spain, Proseiben MAXX in Germany, Mediaset in Italy as well as Eurosport across most European Market and SuperSport in Africa. A full list of broadcasters outlining what will be aired and when it’s available can be found here.