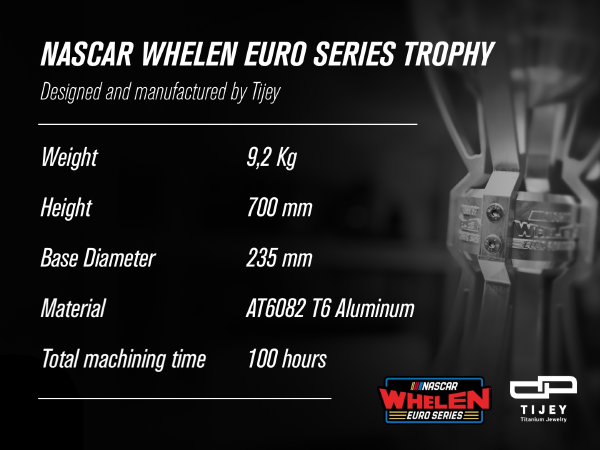 The drivers chasing the NASCAR Whelen Euro Series title will have a new, exciting reason to push themselves to the maximum of their abilities in the 2020 NWES season.

Entering the second year of their partnership, NASCAR Whelen Euro Series and Tijey unveiled today the new NWES trophy that the EuroNASCAR Champion will raise in Valencia, Spain in December.

The trophy is inspired by the NASCAR Cup Series one. Weighing 9,2 Kg, the 700mm tall trophy is entirely built from CNC-machined aeronautic-grade AT6082 T6 aluminum. Each part is machined by a high-end 5-axis cutter and carefully assembled to form a unique, everlasting prize to reward the everlasting achievement of becoming a European NASCAR champion.

The top cup features the shape of the tracks hosting a NASCAR GP, the central ring sports the NWES logo and the base is shaped as a General Tire GT tyre.

The trophy will travel across Europe with the NASCAR Whelen Euro Series to shine in the paddocks of the best race tracks in the Old Continent.