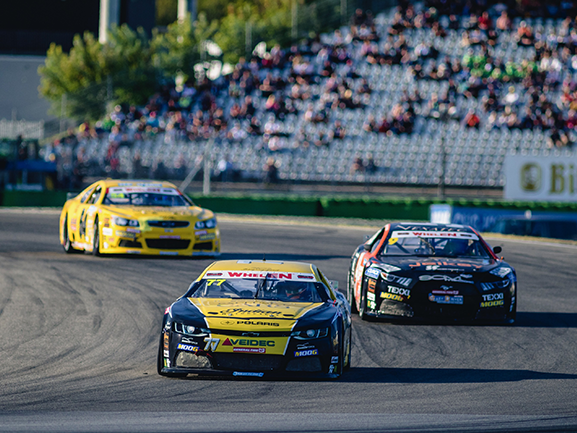 The NASCAR Whelen Euro Series continues to expand its footprint in Europe for the 2020 season with  news for the Scandinavian competitors and fans.

EuroNASCAR will welcome the best drivers from the V8 Thunder Cars to the NWES Drivers Recruitment Program and the Swedish championship will also join the American Fan Fest at Hockenheim on October 17-18 as a support series.

The Scandinavian series will descend to Germany for the final round of its 2020 season, crowning the champion and assigning the spots in the Drivers Recruitment Program in the unique context of the NASCAR GP Germany. The drivers earning a place in the DRP will be the top three in the overall Swedish championship, the top-3 in the Junior Championship and the top three in Super Star category, reserved for drivers aged 40 and over.

“The NASCAR Whelen Euro Series never stopped growing since its creation in 2009. Ten years later, EuroNASCAR is one of the best touring series in Europe and attracts drivers from all over the world to compete in NASCAR on some of the best European racetracks,” declared NWES President – CEO Jerome Galpin. “Interest for NWES is definitely growing in Scandinavia and we have seen more and more drivers from this region joining NWES. They are very good and experienced thanks to the good local V8 Thunder Cars series! This is why we are happy to welcome the best drivers of the Swedish V8 Thunder Cars in our NWES Drivers Recruitment program and the Series to join the Hockenheim American Fan Fest as a support series.”

“Together we can certainly continue to grow NASCAR and the V8 racing in Scandinavia with the goal to run a EuroNASCAR event there in the future as we continue the development of NASCAR across Europe.” added Galpin.

Originated in 1975, the V8 Thunder Cars series is the premier V8 series in Scandinavia, featuring 450-hp V8-powered silhouettes with American muscle-car bodies. The 2020 calendar counts five events: three in Sweden, one in Finland and the final one in Germany alongside the NASCAR Whelen Euro Series.

“Going to Hockenheim and joining NWES is a fantastic opportunity for all the Scandinavian drivers to see all the great possibilities offered by American racing. The racing world in general offers very few opportunities to move up through different series without spending a fortune. We will now create that opportunity by showing that an entry into the V8 Thunder Cars series is the first step in getting ready to race NASCAR in Europe,” said V8 Thunder Cars Coordinator Richard Berggren, whose Memphis Racing team also fields a Chevrolet Camaro in EuroNASCAR. “The NASCAR Whelen Euro Series offers unique career opportunities and we would be thrilled to see a Scandinavian driver going all the way to NASCAR in the US.”

The opening round of the V8 Thunder Cars series is scheduled for July 18-19 at Falkenberg. The NASCAR Whelen Euro Series will hit the track in Vallelunga, Italy on September 12-13 and visit Circuit Zolder in Belgium on October 3-4 before heading to Hockenheim for the American Fan Fest on October 17-18