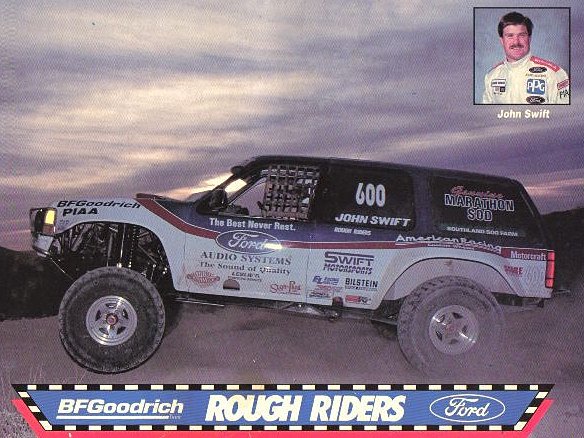 David Westhem and John Swift, two of the legendary SCORE champion racers from the 1980s and 1990s are prepared to launch their new team in the 2020 SCORE World Desert Championship. Both 59 years old, the ‘dynamic duo’ will compete together in Swift’s No. 81L Ford Raptor, built by Racer Engineering, in the SCORE TT Legend class for SCORE Trophy Truck drivers 50 years old and over.

With the four-race 2020 season in a holding pattern, desert racers around the world are hoping to start the 2020 SCORE season at the re-scheduled 34th annual SCORE San Felipe 250 in Baja California.

The season-opening event of the four-race internationally-televised 2020 SCORE World Desert Championship has been postponed from the end of March to May 5-10 in San Felipe, the picturesque, peaceful fishing village on the Sea of Cortez, 125 miles south of the U.S. Border at Calexico, Calif. All four 2020 SCORE races will be run on Mexico’s magnificent Baja California peninsula for the fifth consecutive year.

The race will be televised on a delayed basis on the World of X Games show on the ABC Television Network as co-produced by SCORE International and award-winning BCII TV of Los Angeles. It will also be syndicated internationally to 25 countries.

The event will have a near record 326.7-mile course.

SOME HISTORY
Team owner Westhem, Tahoe City, Calif., was once part of a factory GMC team competing in the prominent Class 8 before SCORE Trophy Truck was introduced in 1994.

Teammate Swift, Santa Rosa, Calif., is a second-generation desert racer who was also the winningest driver on the old Ford/BFGoodrich Rough Rider team from the early 1990s.

Westhem got his first Class 8 win as a privateer at the 1987 SCORE Baja 1000 that caught the eye of many people as Class 8 was the highest profile class in the sport at the time, earning him a factory team with GMC for the next few years.

Racing in parallel careers for over two decades, Westhem and Swift finally joined forces to win Class 8 in that 50th SCORE Baja 1000.

In 2018, the pair teamed up again in the SCORE Baja 1000 finishing third in the new SCORE TT Legend class in the final SCORE race for Westhem’s reliable old Class 8 truck.
Winner of the 1998 SCORE Class 8 season point championship, other career SCORE race wins for Westhem include one in the SCORE San Felipe 250 and two in the old SCORE Laughlin Desert Challenge (1995, 1998).

Swift, one of the original team members of the legendary Ford/BFGoodrich Rough Riders that roamed the deserts of the Southwest U.S. and Baja California from 1991 through 1995, was the winningest driver in the group, earning three SCORE season class point championships (1991, 1992, 1993).

He also won Class 6 in his factory-backed Ford Explorer in the 1991 SCORE San Felipe 250.

Between 1991 and 1993 Swift had 15 class wins out of 23 desert races for the spectacular Ford/BFGoodrich Rough Riders that included such notable racers as Rob MacCachren, the late Manny Esquerra, Dave Ashley/Dan Smith, Chuck Johnson along with brothers Paul and Dave Simon.

Now together for 2020 with a SCORE Trophy Truck in their stable, the ‘Dynamic Duo’ looks to be a ferocious force in the ever-growing SCORE TT Legend class.