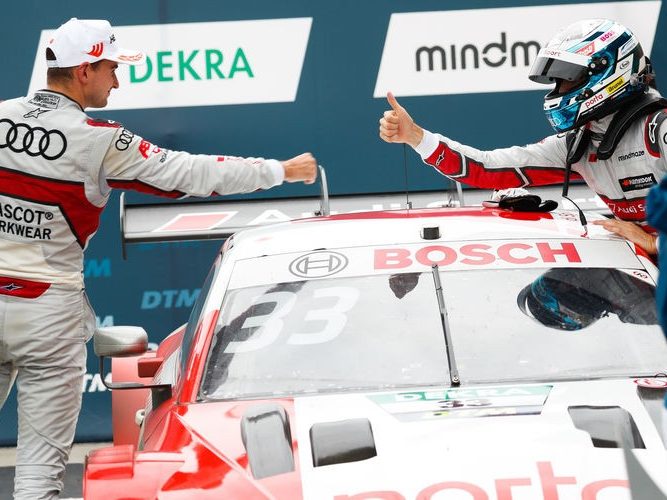 Record run ends after twelve victories: Frijns third at Lausitzring
Robin Frijns from Audi Sport Team Abt Sportsline was the best Audi driver in third place in the “craziest” DTM race of the season so far, even though the Dutchman started from pole position for the fourth time this year.

Victories for GT3 and GT4 versions of the Audi R8 LMS

Audi Sport driver Markus Winkelhock scored a remarkable victory at the Lausitzring with an Audi R8 LMS, which had a novel drive-by-wire system instead of the steering column tried and tested in automotive engineering.

In the case of new vehicles that have been type-approved according to the WLTP, the NEDC figures are derived from the WLTP data. It is possible to specify the WLTP figures voluntarily in addition until such time as this is required by law. In cases where the NEDC figures are specified as value ranges, these do not refer to a particular individual vehicle and do not constitute part of the sales offering. They are intended exclusively as a means of comparison between different vehicle types.

Additional equipment and accessories (e.g. add-on parts, different tire formats, etc.) may change the relevant vehicle parameters, such as weight, rolling resistance and aerodynamics, and, in conjunction with weather and traffic conditions and individual driving style, may affect fuel consumption, electrical power consumption, CO2 emissions and the performance figures for the vehicle.