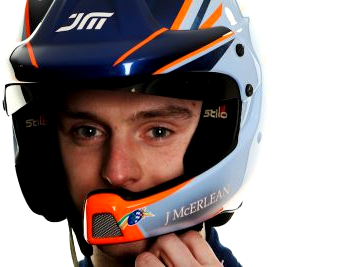 Josh McErlean has recalled the moment he learned that he’d be making his FIA European Rally Championship debut on Rally Hungary next month.

The 21-year-old, part of the same Motorsport Ireland Rally Academy training scheme behind Callum Devine’s ERC1 Junior campaign, will drive a Hyundai i20 R5 for the PCRS team.

“I’ve been very lucky and fortunate enough to have some amazing experiences during my motorsport career and I’ve always looked at the ERC as one of the key goals,” said McErlean, who will be co-driven by Keaton Williams.

“So when I got the call to say there was a possibility of heading to Hungary it was one of those ‘school kid in a sweet shop’ moments to be honest and I began preparations straight away. The fact that it’s now going to happen is pretty surreal but I’m very excited.”

With no previous Rally Hungary experience and only three competitive outings in 2020 to call on, McErlean will be keeping his expectations in check when he takes part in the all-asphalt event in Nyíregyháza from early November.

“It would be foolish to expect a top result but I’ll grabbing this opportunity with both hands,” said McErlean. “I’m putting a lot of work into the preparation and I’ll be looking to drive smart and get the valuable experience under my belt. I know how hard this Rally can be so being the second driver in the Motorsport Ireland Rally Academy and PCRS Rallysport team alongside Callum means I can learn from those around me and take in as much information as possible.

“The ERC is a mega championship with great reach and is always ultra-competitive. There is a lot of people who have put a huge amount of time and effort into this opportunity, from Hyundai Motorsport Customer Racing, Michelin Motorsport, John Coyne, the Rally Academy board and all of my personal sponsors. I cannot thank them enough for putting their faith and trust in me and I hope I can ensure the Motorsport Ireland flag is flown high on the European stage. I’m not underestimating how big this challenge is.”