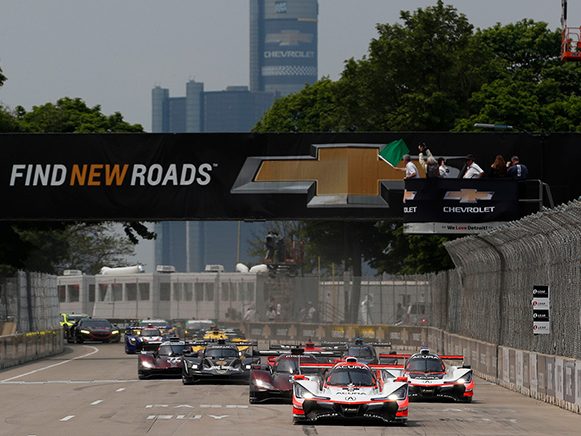 The Chevrolet Detroit Grand Prix presented by Lear, the fifth event on the 2021 IMSA WeatherTech SportsCar Championship schedule, has been pushed back a week in a move that pairs it again with an IndyCar Series doubleheader as in past years. The new dates for the WeatherTech Championship weekend are June 11-12.

The WeatherTech Championship race weekend on Detroit’s Belle Isle Park was initially set for June 5-6 in order to avoid a conflict with the 24 Hours of Le Mans the following week. With the iconic French endurance race postponed until August, it opened the door to shift the WeatherTech Championship race and merge the two event weekends. IMSA’s top-tier series started racing on Belle Isle in 2007, with the only breaks in action coming in 2009-11 and again last year due the coronavirus pandemic.

A bonus for Detroit fans, this change allows for GT Le Mans (GTLM) cars to race in the event in a non-points capacity. It means that the two Corvette Racing Chevrolet Corvette C8.Rs will be able to compete in their home race, with General Motors headquarters at the Renaissance Center in plain view a couple miles away. It will mark the first time since 2008 that the Corvette GTs will race on their home track.

WeatherTech Championship classes competing for points at Belle Isle will be Daytona Prototype international (DPi) and GT Daytona (GTD), though GTD points will count toward the IMSA WeatherTech Sprint Cup and not for the overall season championship. While it was previously announced that the Le Mans Prototype 2 (LMP2) class would be participating at the Motor City event, it will now be competing at a different venue which will be announced at a later date.

“With the 24 Hours of Le Mans moving to August, we were given the opportunity to continue what has become a tradition – giving race fans a weekend full of on-track action with some of the most talented sports car and open-wheel racing drivers in the world,” said John Doonan, IMSA President. “We look forward to returning to Belle Isle Park June 11-12 for the IMSA Chevrolet Sports Car Classic.”