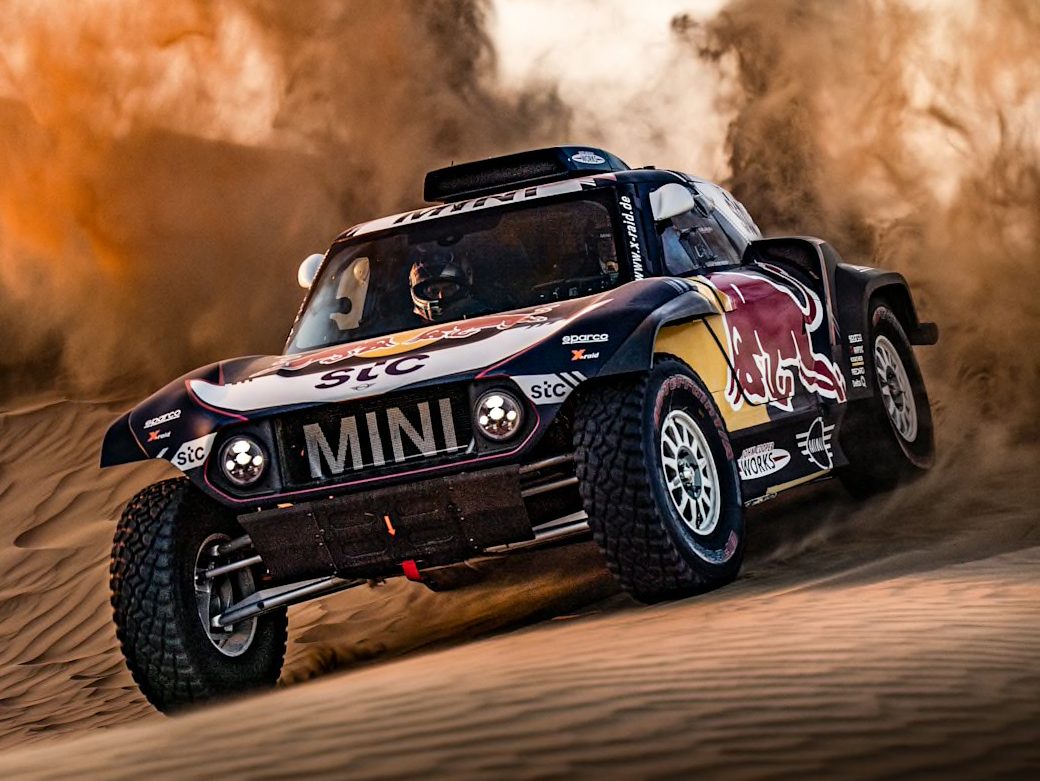 Sakaka to Neom. Liaison Stage of 334 km plus Special Stage of 375 km

The city of the future has not yet emerged from the sand and rocks, but the region of Neom can already boast some impressive creations: those of its ancient geological formations. The canyons, cliffs and mountains of brown rock through which the riders and drivers wound during the second half of the special were worth the price of the navigational difficulties they had to tackle on leaving Sakaka. At the start of the special, they also had to get to grips with stony portions which were not particularly kind to the wheels of the bikers, as Toby Price and Sam Sunderland could testify. In the car race, Sébastien Loeb also encountered misfortune, puncturing his last tyre. Such enchanting views demand tough sacrifices!

Just like a champion! “Nacho” Cornejo took the lead in the general standings yesterday by just one second thanks to his 2nd place on the stage at Sakaka. Exposed to the role of opener after quickly catching his team-mate Ricky Brabec at the front of the race, the Chilean managed to post the best time and increase his lead over Toby Price to 1’05’’, all on the second half of a marathon stage. What’s more, the young man does not seem perturbed at having to approach the last four days of the rally in the position of leader. In the car race, maturity was in evidence, as Nasser Al-Attiyah won his 40th special (see stat of the day) to close in and continue to exert constant pressure on Stéphane Peterhansel, who he now trails by 4’50’’. So far, the X-Raid buggy driver has been a picture of composure and has withstood his Qatari rival’s attacks, but the size of his lead forbids him from making any missteps. An example of such misadventure happened to Aron Domżała, ejected from the leader’s position in the lightweight vehicle category due to a mechanical problem. Austin Jones took advantage of the Polish driver’s misfortune to reach the summit of the general standings with a lead of 9’22’’ over Seth Quintero and 19’42’’ over “Chaleco” López, the winner of a fourth stage this year and determined to make up the time gap. In the quad category, the battle for the top is now between Manuel Andújar and Alexandre Giroud, with advantage to the Argentinean for the moment thanks to a lead of 19’43’’ over the Frenchman, victorious for the fourth time this year including the prologue. In the truck race, the one-two-three finish accomplished on the stage by Kamaz, led by Shibalov, did not alter the top three in the general standings, also entirely blue, headed by Dmitry Sotnikov.

The Abu Dhabi Racing team is ramping up its performance with the duos of Cyril Despres/Mike Horn and Sheikh Khalid Al-Qassimi/Xavier Panseri. On the first stage, Al-Qassimi achieved the fifth best time. He has since then come close to this result without emulating it before today. Assisted by his French co-pilot, the Emirati, who was the eleventh driver to start, climbed up the stage standings to fourth position, a little more than seven minutes behind the winner. Before the start of the day’s special, Cyril Despres, who is taking advantage of this Dakar to collect as much data possible for the development of a hydrogen fuel cell powered vehicle, was coming off the back of his best result this year, with the sixth best time on Sunday. However, the five times winner of the Dakar on a bike went one better today! During the special, he even managed to move into fourth place, before being pipped at the post in the last few kilometres by his team-mate. These two promising performances by the Peugeot drivers will no doubt fuel their determination to do as well if not better on the rally’s return route to Jeddah.

One year is much like another, except for a few details, for Aron Domżała. Assisted by Maciej Marton, the Polish driver displayed consistency by finishing in the top five in five out of the seven stages contested before today, not unlike last year when nonetheless he had to wave goodbye to hopes of overall victory much more prematurely, losing four hours on the second day after winning the opening stage. The duo behind the wheel of a Can-Am has again won a special in 2021 and was in the lead in the general standings. However, bad luck struck again, this time in the guise of a mechanical problem. Domżała lost more than half an hour due to the incident, robbing him of first place in the general standings and considerably compromising his plans. With four days left before the finish in Jeddah, if he still has any hopes of winning, he must avoid any mistakes at all costs.

In 2007, Nasser Al-Attiyah was especially perceived as a hot-headed chancer when he won his first special in Nema, accompanied by Alain Guéhennec behind the wheel of an X-Raid team BMW. Since then, there has not been a single Dakar where he has not tasted victory on at least one stage, a feat which no other driver has achieved over 14 consecutive editions in the history of the rally. On the way to Neom, the Qatari driver picked up the 40th stage victory of his career and is now in 3rd position on the roll of honour for stage wins, with Stéphane Peterhansel (47) and Ari Vatanen (50) in his sights.

The Volkswagen Iltis driven by Spaniard Ignacio Corcuera dates from 1980 and has been faithfully restored in keeping with the characteristics of the vehicle that won the car category that year, with Freddy Kotulinsky behind the wheel. In the race for consistency taking place this year, he is currently 21st in the Dakar Classic standings, which are still dominated by Marc Douton in a Sunhill Buggy.

Toby Price: “I struggled with focusing”

The 2nd placed rider in the general standings lost a small amount of time to “Nacho” Cornejo, but is only 1’05’’ behind.

“It was really tough for me today. I struggled with focusing a lot this morning with the road-book. I was a little bit tired from yesterday’s crash. It was good to make it to the finishing line with me, myself and the bike. I’m glad I’m here and we’ll fix everything up tonight, then get ready for the last few days. The chin’s alright, it’s just a little bit hard to eat. It’s a little bit swollen and I’ve got a bit of a headache, but it’s not too bad – there are no bones broken or anything, I just got some stitches in the cut. It’s all good, it’s fine”.