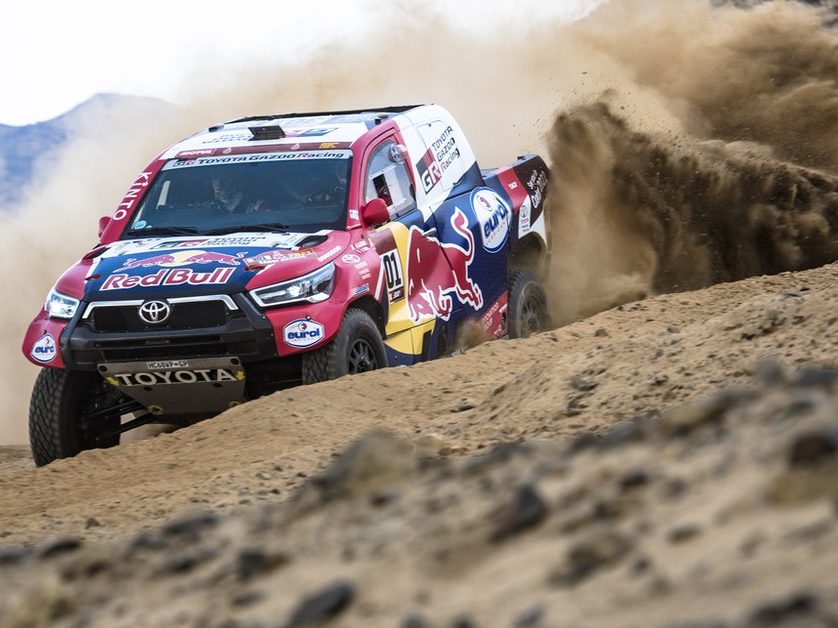 The desert is never far away in Saudi Arabia. The rally only had to venture about 30 kilometres outside Jeddah to find the first sandy tracks and the first opportunity to slide around the course for the bikers, riders and drivers in the Dakar. However, standing on the start podium near King Abdullah Stadium will be the thing they all remember of their first day out in the desert. 498 competitors smiled for the camera on the podium after their 286 vehicles were cleared to start the 43rd edition following the technical and administrative scrutineering: 64 cars, 61 lightweight vehicles (including 44 SSVs), 101 motorbikes, 16 quads and 44 trucks are all set to start the 8,000 km loop tomorrow. Meanwhile, 23 vehicles will be on the start line of the inaugural edition of the Dakar Classic, a regularity race for cars and trucks from the 1980s and 1990s.

As small as the differences were today, they provided an early snapshot of where everyone stands before the chips come down. Defending champion Ricky Brabec claimed the prologue without really sweating it, while rookie Daniel Sanders finished on the podium for the first time. Carlos Sainz had a lacklustre start after suffering a slow puncture: Nasser Al-Attiyah’s pulled level with his Spanish rival with his 36th career stage win —perhaps a sign of things to come. Alexandre Giroud led the quad field home, while Brit Chris Meeke stamped his authority on the lightweight vehicle category and started his rally raid career with a bang. Meanwhile, hell froze over in the truck category as Kamaz proved unable to place a single driver in the top 10 and their Maz cousins, Siarhei Viazovich and Aliaksei Vishneuski, dominated the prologue.

A blast from the past

The first edition of the Dakar Classic is under way… The Porsche 911 that won the 1984 Dakar with René Metge behind the wheel, now driven by American Amy Lerner, stood in stark contrast to its backdrop at King Abdullah Stadium, inaugurated 30 years later.

Brian Baragwanath burst back onto the stage with a stellar performance after five years watching the rally from the sidelines. The South African engineer’s grievous elbow injury, sustained right after finishing the Dakar on the quad podium with three stage wins under his belt, has clearly not affected his raw speed and driving prowess. He surprised all the favourites in a prologue designed to facilitate such upsets and posted the same time as the stage winner, Nasser Al-Attiyah! The fact that Baragwanath is racing for the Century team at the wheel of the CR6 car he has been developing all year long only makes his performance more impressive. To cap it all, the man from Polokwane has teamed up with young Taye Perry, who is serving as his co-driver after finishing his first Dakar on a motorbike last year.

Romain Dumas was probably hoping for a different start to his fourth Dakar. Eighth in 2017, he had to swallow a massive disappointment after withdrawing a mere 71 km into the race last year. The 11 km long prologue of the 2021 Dakar has already extracted its pound of flesh from the French driver, racing at the wheel of his own DXX two-wheel drive car. Dumas is now dead last in the general classification after taking twice as long as stage winner Nasser Al-Attiyah, seemingly as a result of a navigational mistake. And it was but a warning.

41-year-old Kris Meeke already had a long and illustrious rally career behind him, but he wasted no time in proving his worth in the Dakar. The Brit claimed his maiden stage win in his debut in the greatest rally on Earth, dominating the lightweight vehicle category, where experience does not seem to be the only factor. The runner-up, 18-year-old rookie Seth Quintero, is young enough to be his son! One may be 23 years older than the other, but only two seconds separate the two men after the prologue.