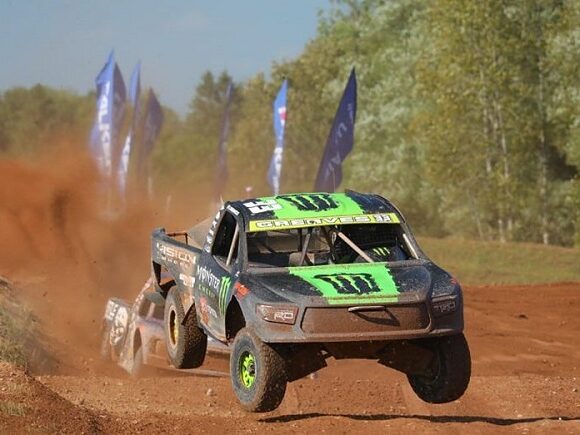 Bark River International Raceway is the second longest track on the Championship Off Road Racing circuit and a venue that the Greaves Duo has experienced a lot of success. With points standings tight and only one race remaining in the season, Johnny and CJ Greaves were looking to rebound from mixed results at Dirt City. The long track runs, sweeping turns, and huge jumps of Bark River provided the perfect place to gain some ground in the standings. It never disappoints the huge crowds with some outstanding, entertaining racing.

CJ pulled off a sweep in the Pro4 Class with wins. Johnny was plagued with mechanical problems in Pro4. Along with his Pro4 wins, CJ took a 2nd place in Pro Stock SxS  but a broken brake line put him out of contention on August 21.

Saturday: The huge field of more than 20 UTV’s cascaded down the hill towards turn one as pro racing kicked off in Bark River. CJ made it through the congestion and worked his way through the field as far as 3rd place by passing Joe Dresel. As he was making a move for 2nd, a rock broke his brake line and he pulled into the hot pits which basically put him out of contention.

Sunday: CJ started deep in the field once again and spent most of the race buried deep in the pack in 22 August’s Pro Stock Side-by-Side race. He continued to pick-off one racer after another, eventually passing Rosales to go into 2nd with only a couple laps remaining. He set his sites for race leader Brock Heger who had a substantial lead. Greaves ran out of time and settled for a hard fought 2nd place. In spite of the problems on Saturday(August 21), he managed to hold on to his 2nd place in the points standings.

Saturday: Johnny Greaves took the early lead as the field hit turn one in (Aug. 21)Saturday’s round 9 race at Bark River. CJ Greaves was not far behind, riding in 4th with Cenni, Mittag and Carlson in front of him. As the laps ticked off, Mittag pulled out of the race leaving the three Monster Energy backed Pro-4’s to duke it out. Just as CJ was making the pass on the elder Greaves, Johnny broke something in his steering taking him out of the race. CJ began to stretch his lead as LeDuc also experienced mechanical problems allowing CJ to cruise on to another win.

Sunday: Johnny G’s number 22 Monster Energy / Maxxis Tire / Toyota won the holeshot once again in (Aug. 22)Sunday’s Pro-4 racing action with CJ Greaves not far behind in 2nd. CJ passed his dad in the cemetery turn as mechanical problems struck Johnny once again. CJ went on to take another win and complete the Pro-4 sweep. He was able to stretch his points lead by a few points setting up a showdown in Crandon on Labor Day weekend.

The final races of the 2021 season will take place at Crandon International Raceway for the World Championship Off Road Races on Labor Day weekend, September 3-4. It will include the annual Crandon World Cup race between the Pro-2 and Pro-4 classes.