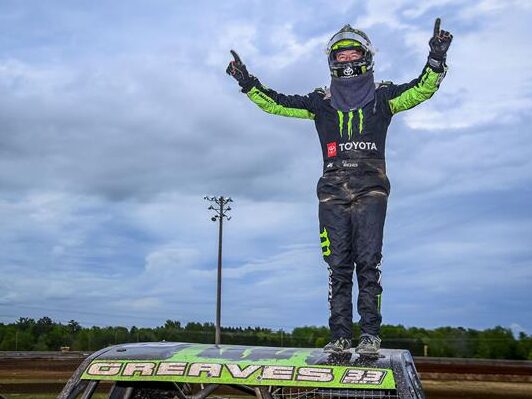 Antigo, Wisconsin. ~ The opening round of AMSOIL Championship Off-Road featured a renewal of rivalries on Saturday. Off-road heavyweights such as CJ Greaves and Kyle LeDuc in Pro 4, wide-open Pro 2 and Pro Lite classes and a large number of come from the back wins set the tone for a spectacular weekend of racing.

Round two  was just as electric as the best off-road racers in the world put on a world-class show in front of a packed house in Antigo, Wisconsin.

Sunday’s had the making of a mad dash between two of the best off-road drivers on the planet. CJ Greaves and Kyle LeDuc sat side-by-side on the front row as the power Pro 4’s rumbled towards the start line.

The two blasted off the start and for the next six laps it was a chess game for the lead, with LeDuc holding the slightest of edges each time around the track. But on lap seven, LeDuc tucked into pit row to get a flat tire changed. That left Greaves out front, alone and in the same position as his opening round win on Saturday. Even when LeDuc got back on the lead lap, Greaves held the advantage and motored to the weekend sweep.

“Kyle and I were ready to do battle and we were right there on speed and all of a sudden he got a little loose there and he said he got a flat,” said Greaves. “After that we just worried about doing our race and my dad came on the radio and said, ‘don’t wreck this win trying to chase him down’.”

LeDuc has never quit pushing in a race if he thinks he has a chance. He was able to get the tire changed and worked his way back onto the lead lap. With two laps to go, LeDuc was fourth and the race was restarted after a red flag incident involving Adrian Cenni. LeDuc advanced two spots but couldn’t catch Greaves before time ran out.

Andrew Carlson kept within striking distance throughout the race. A day after flipping his truck and exiting early, Carlson rebounded to keep pace in the points race by finishing third.