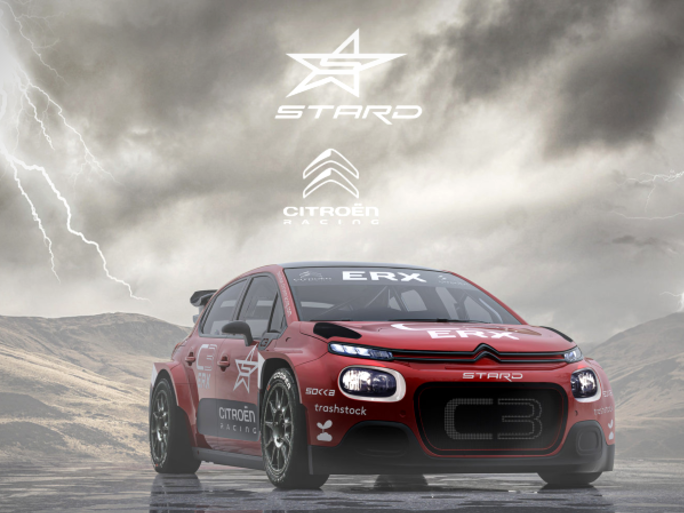 The C3 ERX will race in the Projekt E series alongside the FIA World Rallycross Championship and was recently granted FIA International Series status. French driver Cyril Raymond, a former rallycross champion and World RX driver, will give the C3 ERX its debut at the Riga circuit in Latvia where Austrian rally legend Manfred Stohl drove the Projekt E development car in front of spectators for the very first time last year.

The C3 ERX is the world’s first R5-based electric competition car, developed and built by STARD in Austria, in congruity with Citroën Racing. It uses STARD’s REVelution electric powertrain kit, which has been designed specially to be incorporated into R5 based chassis and can easily use mass-production road car electric motors.

The striking livery applied to the C3 ERX’s composite bodywork has been designed to incorporate links to Citroen’s successful off-road motorsport history, while its clean lines have synergies with the move into the future with state-of-the-art technology, as one of the worlds first ever customer-available electric motorsport cars.

Around 80% of the R5 rolling chassis components from the successful C3 R5 have been retained, including the core bodyshell, brakes, suspension system, dampers, steering system, body package, but in some cases have been adapted to suit the EV requirements of using the REVelution powertrain and competing in Projekt E.

The C3 ERX is suitable to race in rallycross, hill climbs and sprint events, and parts will be available directly from the Citroen Racing Boutique.

The event in Latvia next week is the second Projekt E round. The first round in Sweden just a few weeks ago at the legendary Holjes rallycross circuit was won by American rally, rallycross and Gymkhana star Ken Block.

“The STARD Citroen Racing C3 ERX is yet another milestone in our mission to pioneer road car-based electric customer motorsport. We believe that combining a state-of-the-art manufacturer developed R5 chassis package like the C3 with our FIA approved STARD high-performance electric powertrain delivers the perfect combination of high performance, cost efficiency and reliability. We think the new livery looks fantastic and we can’t wait to see the car in action ion Riga next week with Cyril Raymond at the wheel.”

STARD is focussing on entire vehicle and subsystem development and, together with Stohl Group´s other departments, covers the process chain, from first concept, design, prototype build-up, up to small series vehicle production entirely in house.

Since 2012 STARD is focusing on R&D of EV powertrain systems and has taken a pioneering role in EV technology in road cars bodyshell based motorsport categories like rally and rallycross by the introduction of the world´s first all-electric Rally/Rallycross development car “HIPER MK1“, and from 2020 being exclusively responsible for all technical aspects of the “Projekt E” FIA International Series series, the first international all-electric rallycross series worldwide.

STARD is further competing in the FIA World Rallycross Championship with in house developed Ford Fiesta-based Supercars since 2015.