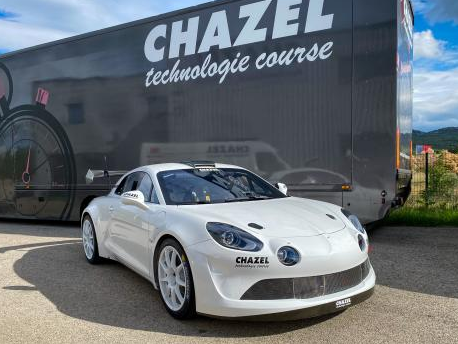 French company Chazel Technologie Course is preparing to unleash an Alpine A110 RGT onto the stages of the FIA European Rally Championship in 2020.

It will field Zelindo Melegari on Rally Fafe Montelongo in Portugal from October 2-4 for what will be the exciting new car’s international debut following its homologation in July.

The Alpine is eligible for the ERC2 category, which Italian Melegari heads after two rounds.

Louis Chazel, Chazel Technologie Course’s Rally Co-ordinator, explained: “The ERC is the reference championship in Europe. We are here for showing the very good performance of the Alpine A110 RGT on Tarmac. It’s a brand-new car, with entries only for the moment in French rallies, so this will be the first appearance of an Alpine A110 RGT on international roads.

“From the team’s side, we are very happy to be back in the ERC. Our last full season in the ERC was in 2013 when we were in charge of the official Renault Sport team. The ERC is a very relevant championship, with mythical rallies and very hard competition, a perfect place for the new Alpine A110 RGT.”

The Alpine brand is synonymous with rallying with Jean-Claude Andruet winning the FIA European Rally Championship in 1970 armed with an Alpine Renault A110 1600.

With the remaining four rounds of the 2020 ERC season on Tarmac, Louis Chazel explained why the revised European calendar is ideal for his team to further develop the car’s set-up and demonstrate its pace and potential to customers.

For the moment, the Alpine A110 RGT is only homologated in Tarmac spec, we have entered several rallies in France and now we are happy to be at the start of Rally Fafe Montelongo.”

Chazel confirmed it is hoped the Alpine A110 RGT will make further appearances in this year’s ERC.

Zelindo Melegari can’t wait to drive his Alpine A110 RGT in anger following a successful recent test. “I chose this car because the rest of the ERC season is on Tarmac and I think this car will be much more competitive on Tarmac than the Subaru, which is an older car. I really enjoy the gravel events and I feel sorry it’s all Tarmac now. But I am still happy to compete and I had a good feeling with this car on the test we did together. The team is very professional, they know what they have to do and I can’t wait to be back in the car again and try to fight for the podium in ERC2.”