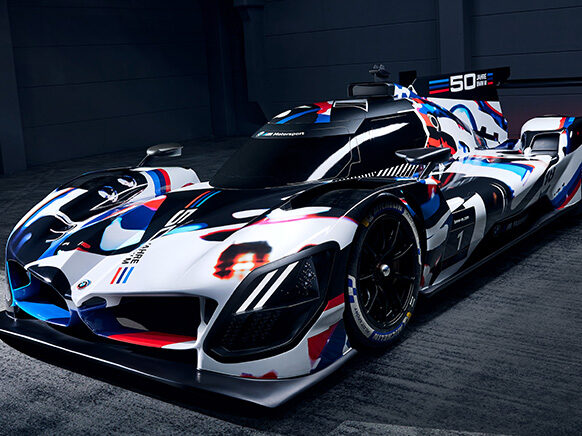 DAYTONA BEACH, Florida. – BMW M Motorsport made certain its LMDh car will “look like a BMW” when it debuts with the rest of the Grand Touring Prototype (GTP) entries in the 2023 IMSA WeatherTech SportsCar Championship.

BMW unveiled its new prototype – named the BMW M Hybrid V8 – on Monday. Designed by BMW Group Designworks, the car features the wide kidney-shaped front grille synonymous with the brand’s look. The prototype also sports a bold camouflage livery that will be used during the development and testing process that carries the BMW M 50th anniversary logo on the hood and pays homage to many of the iconic BMW race cars throughout its five-decade motorsports history.

“The most critical task and the greatest challenge for the design team in the LMDh program was that the prototype must be clearly recognizable as a BMW M Motorsport car,” said Franciscus van Meel, CEO of BMW M GmbH. “And I can say this to all the fans: Just one look is enough to confirm that the BMW M Hybrid V8 is a BMW. It clearly carries the genes of BMW M.

“I also love the camouflage livery with its references to the great history of the brand in North America. Congratulations to the design and aerodynamics departments at BMW M Motorsport and Dallara on their great work. I can hardly wait to see the BMW M Hybrid V8 on the track soon.” “My team’s job was to make the BMW M Hybrid V8 look like a BMW and embrace every opportunity to make it also perform like one on the racetrack,” said BMW Group Designworks Global Automotive Director Michael Scully. “The design is rooted in BMW’s DNA of purposeful, efficient performance, and the exterior’s bold, determined character invokes BMW’s frontiersmanship of turbo power; now united with an optimized hybrid electric powertrain.

“The camouflage livery celebrates the 50 years of M by commemorating the great cars of BMW’s storied history in IMSA racing while uniquely cloaking the BMW M Hybrid V8’s future-facing exterior geometry and technologies during the critical on-track development phase of the project. If you look closely, you’ll discover multiple winners of the Daytona 24 Hours, as well as the very first purpose-built IMSA GTP car from 1981: the BMW M1/C. We’ll follow up this camouflage with a works livery that exemplifies the dynamism and excitement of hybrid electric-powered competition.”

The BMW M Hybrid V8 will make its competition debut in the 2023 Rolex 24 At Daytona as part of the WeatherTech Championship GTP class. GTP will include new prototypes from Acura, Cadillac and Porsche and potentially others next year, with Lamborghini committed to joining in 2024.