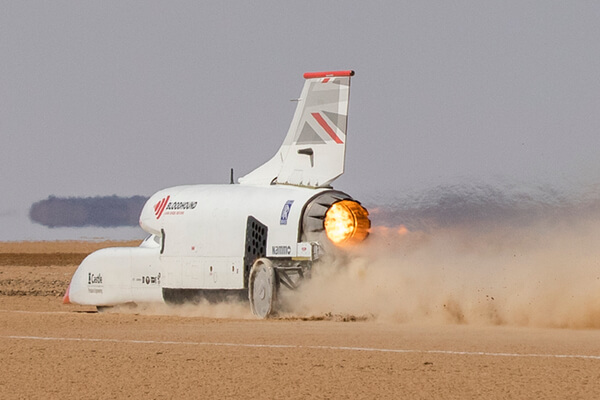 Bloodhound Land Speed Record car hits a new top speed of 1,010 km/h (628 mph) tearing down the Kalahari Desert racing track in South Africa. At the speeds the Bloodhound LSP is travelling, equates to journey from London to Edinburgh in 39 mins (666 km) or Cape Town to Johannesburg in 1 hour 23 mins (1,400 km).

The team announces that speed testing is now complete after reaching a crucial high speed testing phase of the project. Propelled by an EJ200 jet engine normally found in a Eurofighter Typhoon fighter plane, the Bloodhound LSR reached maximum velocity as she passed the 8 km (5 mile) mark in just 50 seconds. Supersonic airflow was detected around the rear suspension after these test runs.