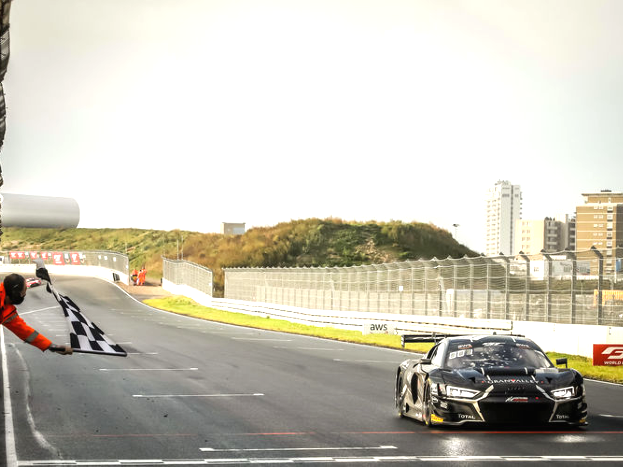 The Belgian Audi Club Team WRT celebrated its second victory of the season in the GT World Challenge Sprint Cup at Zandvoort and remains at the top of the standings. The Audi RS 3 LMS contributed to a successful weekend of Audi Sport customer racing with a total of four wins worldwide.

Victory and podium finish at Zandvoort: The third of four rounds of the GT World Challenge Europe Sprint Cup was tailor-made for Audi Sport’s customer teams. On the wet track at Zandvoort, Ryuichiro Tomita had decided to drive on rain tires in the Audi R8 LMS of Belgian Audi Club Team WRT before the first race.

The Japanese driver, who started from third place, thus overtook his two front runners, who had been on slicks, right after the start. At half time, the Asian handed over his car to Kelvin van der Linde.

The South African extended his lead to more than 30 seconds and celebrated his first victory of the season in the sprint race series with his teammate. Audi Sport driver van der Linde has thus taken the lead in the overall standings of the GT World Challenge, which includes both sprint and endurance races.

The two Frenchmen and their team remain championship leaders in the Silver Cup classification of the sprint racing series before the finale. Saintéloc Racing won another cup on the North Sea coast. On his 33rd birthday, Audi Sport driver Christopher Haase achieved second place overall together with Arthur Rougier in the second race.

Series of successes continued: Uwe Alzen continues to set the pace in Spezial Tourenwagen Trophy. On the fourth race weekend of the club sport racing series, the racer in the Audi R8 LMS also remained unbeaten at the Sachsenring. In both qualifying sessions, the 53-year-old ex-professional had secured pole position. In the first sprint, he gained a 1.6 second lead over Tobias Schulze, in the second race he crossed the finish line 18.3 seconds ahead of the Nissan driver. Thus the private driver and his Spirit Race Team Uwe Alzen Automotive won all eight sprints in the current season.

Class victory in Virginia: On the sixth race weekend of the American Trans-Am racing series, an Audi privateer won in his class. At the Virginia circuit, Ken Thwaits in the Audi R8 LMS ultra won the XGT class.