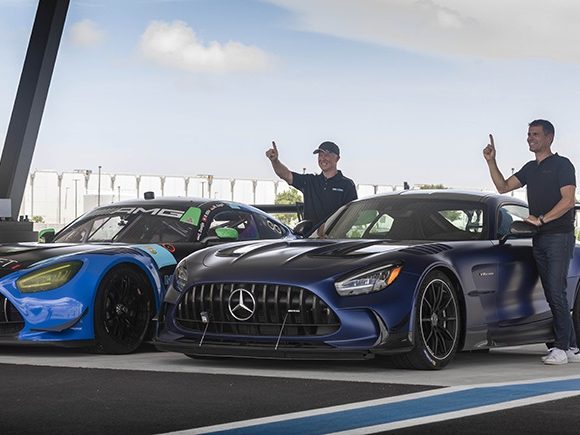 DAYTONA BEACH, Fla. – The line between road cars and racing cars has become extremely blurred. Latest case in point: The new Mercedes-AMG GT Black Series that made its worldwide debut accompanied by the 2021 Rolex 24 At Daytona-winning Mercedes-AMG GT3.

The Mercedes-AMG GT debuted in 2015 as the AMG performance division’s first pure sports car. With classic front-engine/rear-drive proportions and a robust 469-horsepower, 4.0-liter twin-turbo V-8, the Mercedes-AMG GT was the Porsche 911’s first true competitor from within Germany.

Over the years, various improvements and enhancements have been introduced into the GT family. The most powerful iteration was known as the GT R, unveiled in 2017 with 577 horsepower under that long hood and a complex rear wing modeled after the GT3 and GT4 racing versions of the GT.

The GT Black Series has even stronger visual links to the GT3 and GT4 cars that compete in the IMSA WeatherTech SportsCar Championship, IMSA Michelin Pilot Challenge and other production car-based racing series around the world. The Black Series shares the GT3’s larger radiator opening and top-ducted carbon-fiber hood, and features a manually adjustable front splitter, rear diffuser and two-stage rear wing with speed-sensitive electronic activation.

While race inspired, the active aerodynamic technology featured on the road-going Black Series is in reality somewhat more sophisticated than what is permitted in the WeatherTech Championship’s GT Daytona (GTD) category or other international GT3 championships. The Black Series for the street is also actually more powerful than the racing car, pushing 720 horsepower through an uprated seven-speed, dual-clutch transmission. Cars competing in worldwide GT3 racing are limited to 500-600 horsepower but are, of course, considerably lighter than their street counterparts.

The Black Series can accelerate from 0 to 60 mph in just 3.1 seconds, and it will reach 200 kilometers per hour (122 mph) in less than nine seconds. Höchstgeschwindigkeit (top speed) – for closed circuit use only – is 202 mph.

The GT is just the sixth AMG vehicle to receive the Black Series treatment since 2006.

Mercedes-AMG gave the GT Black Series its official unveiling last Tuesday at The Concours Club, a newly constructed private facility in Opa Locka, Florida, that features a two-mile road course and various track and entertainment amenities for members. Parked next to the Black Series was the No. 57 Winward Racing Mercedes-AMG GT3 that Indy Dontje, Russell Ward, Maro Engel and Phillip Ellis drove to victory in January at the Rolex 24.

“I would say when you put these cars side by side, they look the same – only the stickers are changing!” observed Dimitris Psillakis, Head of Marketing and Sales, Mercedes-Benz Cars North America and CEO of Mercedes-Benz USA. “But of course, when you drive the two vehicles, there are certain differences between this pure racetrack monster and a street legal car,” he added.

Winward Racing team owner Bryce Ward was on hand for the launch of the Black Series. Ward, who competes full time in the Michelin Pilot Challenge for his team, is uniquely placed to compare the driving experience between the new road car and Winward’s IMSA GT3 and GT4 machinery.

Ward confirmed he is set to take delivery of his own matte black Black Series soon.

“The Black Series certainly behaves similar to the GT3, and it’s actually got a bit more power, so when you hit the gas pedal, it really does take off,” Ward said. “The carbon ceramic brakes are absolutely amazing.

“It’s truly an amazing vehicle,” he added. “I really loved driving it, and it really gets your blood pumping!”