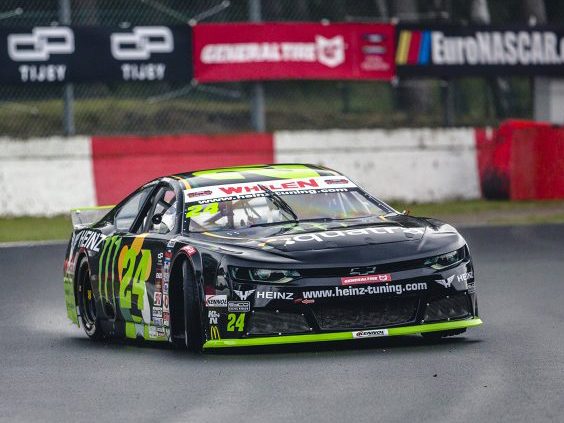 Day shattered the track record at Circuit Zolder with a blisteringly fast 1:36.929 lap around the 4 kilometres of the iconic Belgian track. In EuroNASCAR 2, points leader Tobias Dauenhauer continued his domination in the championship by posting the quickest time across two wet sessions with a 1:47.068 lap.

“It was good,” said Day. “We had mixed conditions with the rain and drying track. I was really pushing this time. The Monster Energy Chevrolet is very good and it’s PK Carsport’s home track, so we know that we are fast here.”
Stienes Longin, who grabbed his maiden win at Zolder in torrential rain last year and led a wet first practice session, rounded out the top-5. Behind the Belgian, Lucas Lasserre, Giorgio Maggi, Thomas Ferrando, Gianmarco Ercoli and Nicolò Rocca completed the top-10.

The EuroNASCAR 2 drivers had to deal with two wet sessions to open the NASCAR GP Belgium and once again Dauenhauer topped the charts. The German posted a 1:47.068 lap to edge Guillaume Dumarey – The Belgian was quickest in the first practice session – by 0.303 seconds and Nicholas Risitano by 0.917. Martin Doubek ended up fourth in his return to the NASCAR Whelen Euro Series field ahead of Vittorio Ghirelli.

“The car felt very good in wet conditions and for me, it’s completely new to drive the RZ Oil Germany Ford Mustang on a damp track,” said Dauenhauer, who dominated the season opener with two impressive race wins. “I’m quite happy with the first place in practice and I hope we can continue with this momentum tomorrow.”