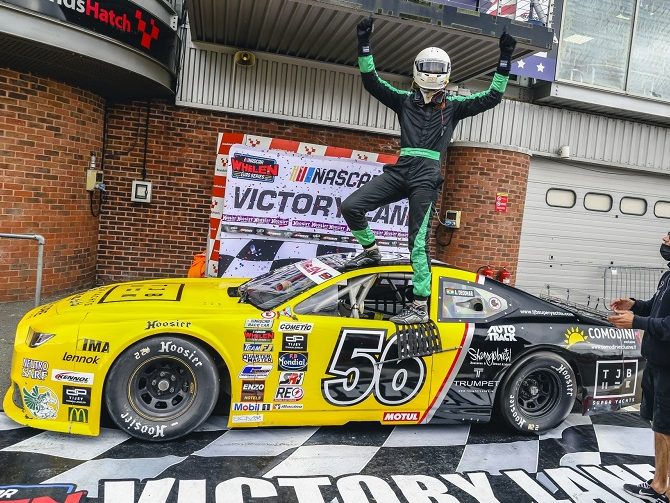 Advait Deodhar made a lifetime dream come true at his home track of Brands Hatch, UK. The Indian living in London grabbed the maiden win of his NASCAR Whelen Euro Series career at the 1.94 kilometer Indy Circuit. Deodhar led all 30 laps and defended his lead against a charging Tobias Dauenhauer, who ended up second at the wheel of the #50 Hendriks Motorsport Ford Mustang.

Starting from the pole for his 21st EuroNASCAR 2 race, Deodhar kept Dauenhauer at bay in the first few laps despite all the attempts the German made. The 31-year-old never really pulled away from the #50 Mustang in second and had his mirrors full of the Hendriks Motorsport car. At the end of 30 tense laps, he crossed the finish line 0.433 ahead of Dauenhauer and celebrated his maiden NWES win.

“I will never forget this moment in my life”, said Deodhar, who posted the fastest lap and thus also secured pole for the race on Sunday. “I need to pinch myself because I cannot believe I have won. It was a tough race with Tobias at my back bumper during all laps of this round. Thanks to CAAL Racing for giving me an awesome car. It was only the second win of my life and it’s something very special to score one here at Brands Hatch.” Starting from fifth place, Francesco Garisto was on a mission in EuroNASCAR 2 Round 3 at the wheel of the #17 42 Racing Shadow DNM8. The Italian overtook his fellow countryman Alberto Panebianco and settled down in third. He crossed the finish line on that position but was demoted back to seventh after a post-race penalty for an avoidable collision with Panebianco.

Simon Pilate inherited third place with a strong run after a safety car period that was triggered by Levi Lintukanto on lap 3. The Finn got stuck in the gravel of Paddock Hill Bent and the caution was necessary to clear the turn. Green flags waved again on lap 11 and Pilate powered his way up to fourth after passing his DF1 Racing teammate Justin Kunz and Not Only Motorsport’s Panebianco.

Topping the Rookie Trophy standings, Panebianco ended up fourth with the best EuroNASCAR 2 finish of his career so far. Kunz, who started from third was shuffled down the order back to fifth but scored important points for the championship battle. Valencia double winner Martin Doubek drove his Hendriks Mustang to sixth ahead of Garisto and  Double V Racing’s Pierluigi Veronesi.