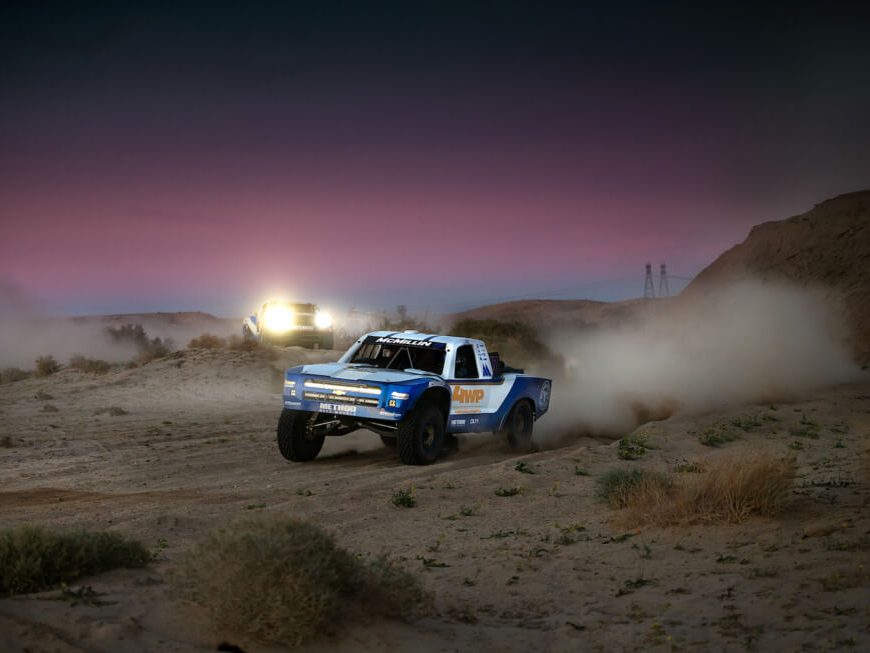 First published by The Dirt, California 2020.

4 Wheel Parts is proud to announce the addition of Dan & Luke McMillin of McMillin Racing to the formidable “4WP Official” team. The multi-year deal will see the off-road racing veterans campaign their two elite racing trucks with 4WP as title sponsors in the Trophy Truck class at SCORE and other high-profile off-road events. Other events include next week’s King of The Hammers T1 race where Luke McMillin returns in the #83 truck as the 2019 event winner, hoping to go back-to-back. Dan McMillin will debut his all-new #17 Mason Motorsports-built all-wheel-drive truck, dubbed one of the world’s most elite Trophy Truck platforms.

“In 2019 we built one of the strongest teams of racers and influencers to champion our brand across the nation. Adding Dan & Luke McMillin to the “4WP Official” team only strengthens the program. Their deep family history in the off-road racing world and highly respected values and professionalism is greatly admired. Factor in that they are two of the best off-road racers in the sport today with a program that is considered the best-of-the-best; we couldn’t be more excited to welcome Luke and Dan to the 4WP family,” stated Craig Scanlon, President & CEO of 4 Wheel Parts.

The legendary McMillin Racing family roots track all the way back to 1976 where family patriarch Corky McMillin, Dan & Luke’s grandfather, & their father Mark McMillin competed in their first Baja 1000 race. Corky would win his first Baja 1000 three years later at the 1979 Baja 1000. The winning has continued on for the better part of 4 decades now with Dan & Luke McMillin carrying the torch alongside cousin Andy McMillin, all competing in the sport’s elite Trophy Truck class.

“To say we are fired up to have 4WP as title sponsors of the #17 & #83 trucks would be an understatement. To have such a large and respected brand on board with our race program, supporting our efforts in what Luke and I love to do is not only rewarding but also motivating. We are both looking forward to representing 4WP at the highest of levels while remaining equally as excited to debut the all-new #17 Mason Motorsports all-wheel-drive truck in such a unique and cool way. It’s important for us to believe in every brand we represent as every company we align with directly reflects who we are as professionals. 2020 is a big year for McMillin Racing and we are thrilled to get out there and win some races,” said Dan McMillin, driver of the #17 Trophy Truck.

“Dan & Luke are able to do more than just represent our brand during race weekends. As two of the most talented and respected athletes in the sport, we look forward to partnering with their program to excite customers and bring a unique voice to our marketing efforts in the southwest and beyond. I have been a fan of the McMillin Racing program for 20 years. To be able to connect with them at 4WP, support their amazing program and work alongside them this year is extremely exciting. The timing couldn’t be better as we head to the 2020 King Of The Hammers race in full force both from the retail perspective and the racing side. Luke McMillin bolsters our KOH roster by giving us sponsored class winners in the three major classes alongside 2019 winners Jason Scherer and Mitch Guthrie Jr. Plus with Dan McMillin debuting his jaw-dropping AWD Trophy Truck for the first time, this year’s event is shaping up to the best one yet for 4WP,” added 4 Wheel Parts Director of Marketing, Joey DiGiovanni.