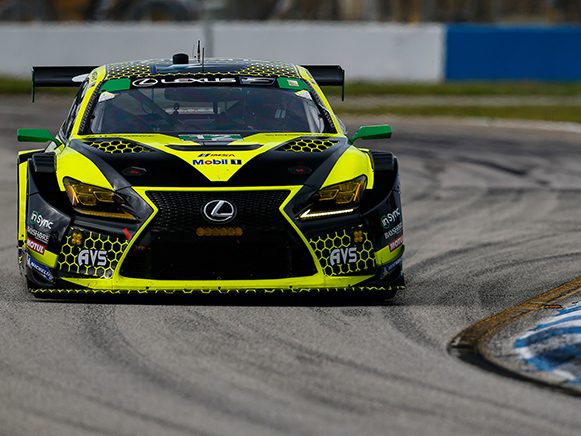 The duo will drive alongside Jack Hawksworth and Aaron Telitz, who were previously named to pilot the No. 14 Vasser Sullivan Lexus in the GT Daytona (GTD) class.

The 2021 season, which opens Jan. 30-31 with the famed Rolex 24 At Daytona, will be the third year for Montecalvo with the team. The 30-year-old from New Jersey collected his first IMSA win last season, co-driving the No. 12 to victory at Road America with Townsend Bell. Montecalvo also collected a pair of Motul Pole Awards (Sebring in July and Michelin Raceway Road Atlanta in September) on his way to finishing 13th in the driver standings.

Veach, 26, is a newcomer to sports car racing who’s spent the past three-plus seasons driving in the IndyCar Series. The team issued a statement lauding the new driver pairing.

“After two seasons with us, Frankie has now become a contender for a pole and/or a win every weekend,” the statement read. “We expect you’ll see more of this from Frankie in the ’21 season.

“The timing with Zach is perfect, as he transitions to the next stage of his career in sports cars after a great run in IndyCar. Zach has already shown his commitment to winning by relocating to Charlotte to be closer to the team and cut down his time to get up to speed in sports cars. We look forward to seeing Frankie and Zach being extremely competitive this season.”

Montecalvo is looking forward to building on the 2020 season that saw the No. 14 Lexus win three races and the IMSA WeatherTech Sprint Cup while finishing third in the overall standings. The No. 12 placed third in the Sprint Cup battle and fifth in the season-long GTD standings.

“The 2020 season was a crazy ride full of ups and downs,” Montecalvo said. “As a team, we had multiple wins, podiums and pole positions. Each year I feel we improved, just getting better and better, so I can’t wait to make my third consecutive year with Vasser Sullivan a great one.”

Veach compiled three top-five and nine top-10 results in 47 career IndyCar starts. The Ohioan is eager to get started on the next chapter of his racing career.

“I am thrilled we were able to put this program together,” Veach said. “Everyone from Vasser Sullivan has been a dream to work with. I can’t wait to get to Daytona in January to start what will be a great year with my teammate Frankie Montecalvo in the No. 12 Vasser Sullivan Lexus RC F GT3 car.”

The Vasser Sullivan cars will be among those participating in the Roar Before the Rolex 24 from Jan. 22-24, providing the chance to test on the 3.56-mile Daytona International Speedway road course and compete in the Motul Pole Award 100, the qualifying race that will set the Rolex 24 starting grid. Race week for the Rolex 24 runs Jan 27-31, with the 24-hour race set to start at 3:40 p.m. ET Saturday, Jan. 30.