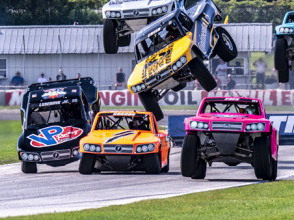 Tentatively, the 2020 season will kick off with a return to stadiums, which last took place with the 2018 season opener at Lake Elsinore Diamond (the year also ended in a stadium with the Race of Champions at Foro Sol, though it used a head-to-head format rather than typical stadium racing).

Scheduled for 1 February is a date at a Southern California stadium; while a specific site was not revealed, the trucks have run stadium events in the region at the Los Angeles Memorial Coliseum and SDCCU Stadium in 2013.

Later in the month, the American trucks will join their Australian counterparts for the Boost Mobile Super Trucks opener at the Adelaide 500. Announced in August, the Adelaide weekend previously served as the first race of the SST season from 2015 to 2017.

In April, the first standalone Australian rounds will be the trucks’ maiden trips to Symmonds Plains Raceway and Pukekohe Raceway, the latter also being their first time in New Zealand. In the States, SST returns to the Long Beach Grand Prix for the eighth straight year; the California street course has been on the series’ schedule since the inaugural season in 2013.

While the SPEED Energy trucks take May and June off, the Boost Mobile trucks head to Barbagallo Raceway in Perth, which hosted SST races in 2017 and 2018, and the Townsville 400, which last held a weekend in 2016. Supporting the Perth SuperNight, the Barbagallo rounds will also be at night.

In July, while the SPEED Energy series goes to Canada for Honda Indy Toronto, their Australian brothers return to Hidden Valley Raceway in Darwin. Darwin last hosted SST in 2017.

August will see the Americans join the NASCAR Xfinity Series at Road America and the NTT IndyCar Series at Mid-Ohio Sports Car Course. Road America has been on the SST slate since 2018, while Mid-Ohio hosted two consecutive SST weekends in 2019.

This will follow with the second co-sanctioned races between the two series at Sydney Motorsport Park in late August; Sydney welcomed the trucks in late 2018 alongside the Australian Motor Racing Series after they were controversially banned by the Confederation of Australian Motor Sport (CAMS). Sydney will mark the first American SST road course race under the lights.

In early September, SST returns to Portland International Raceway alongside IndyCar. A month later, both series will end their seasons with their third and final companion event: the Gold Coast 600 at Surfers Paradise. The street course hosted SST’s return last October.