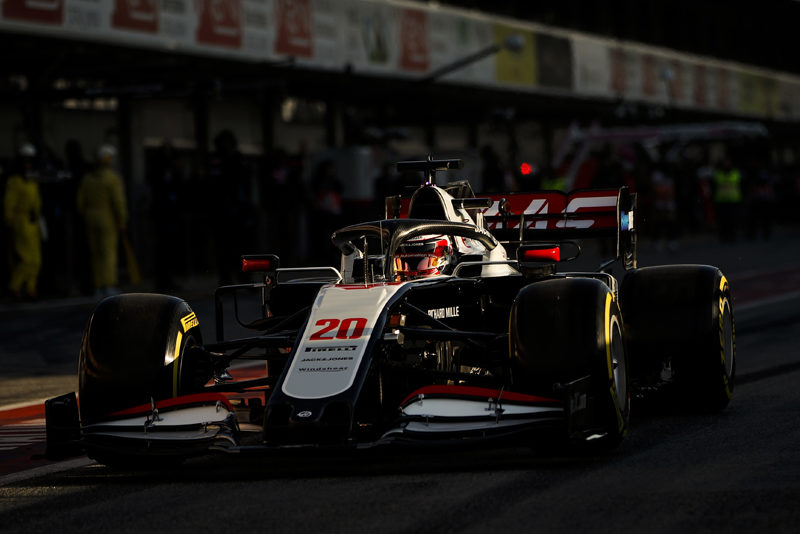 Haas F1 Team Update: Kevin Magnussen was first up behind the wheel of the Haas F1 Team VF-20 on the opening day of Formula One pre-season testing Wednesday at Circuit de Barcelona – Catalunya.

Having officially unveiled the Ferrari-powered VF-20 before the waiting media at 8 a.m. local time, one hour later Magnussen exited the garage sharp as the track opened and testing commenced – the first of six scheduled test days over the next two weeks at the Spanish circuit.

When the checkered flag dropped nine hours later Magnussen had recorded 106 laps around the 4.655-kilometer (2.892-mile) track. Wednesday’s lap total marks the highest number of laps ever recorded by a Haas F1 Team car on the opening day of pre-season testing, the previous best set last season when Romain Grosjean logged 65 laps in the VF-19. Magnussen’s best time on the VF-20’s debut was a 1:18.466.

Morning running totaled 55 laps with a focus on signing off components and working on the balance of the car. The afternoon plan focused on gaining additional mileage and test items for reliability. Magnussen added 51 laps to his morning tally.

Romain Grosjean takes over the VF-20 on Thursday before both drivers share driving duties on Friday.