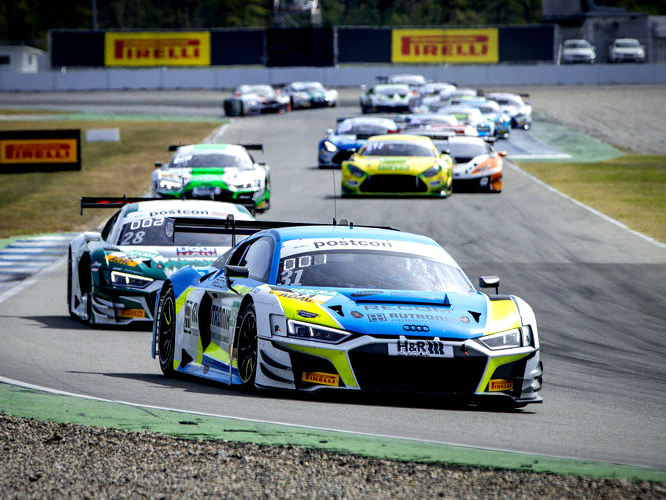 >Victories for Audi RS 3 LMS in Italy and China

In its most successful weekend in the ADAC GT Masters to date, the Audi R8 LMS achieved a 1-2-3 win at Hockenheim. The first generation of the GT3 sports car is still a winner as well, while the leader of the TCR Italy standings relies on the Audi RS 3 LMS touring car.

From the fifth place in the standings to the top: In the ADAC GT Masters, the two Audi Sport drivers Kelvin van der Linde/Patric Niederhauser transformed a 31-point deficit into a four-point lead on just one race weekend. The South African and the Swiss came to Hockenheim in fifth place and left the Motodrom in Germany’s Baden region as championship leaders.

The driver duo of the Rutronik Racing team in the Audi R8 LMS started the first race from fourth place on the grid, while their teammate Dennis Marschall had secured pole position. Niederhauser defended his fourth place in a pack of cars after the start of the race. After the Swiss had handed over the car to his teammate during the pit stop, Kelvin van der Linde improved by two positions in the second half of the race and finished second.

In the second race, the Audi customer teams put on an even stronger show. Starting in sixth place, Kelvin van der Linde overtook all competitors in front of him on the first lap. Patric Niederhauser took over the Audi during the driver change, controlled the race and crossed the finish line with a 4.3-second lead. For the third time in a row, van der Linde thus won the race of the ADAC GT Masters at Hockenheim in an Audi.

For the Audi R8 LMS, it was the second victory of the season in this series. Behind the fastest duo in the field, last year’s Junior Champion Max Hofer and Audi Sport driver Christopher Haase crossed the finish line. They had started from third place for Montaplast by Land-Motorsport in another Audi R8 LMS. The first 1-2-3 victory of the year for the four rings in the German league of super sports cars was completed by Rolf Ineichen and Audi Sport driver Mirko Bortolotti from Team WRT.

Second place in the North of New Zealand: One week after the season opener on the South Island, the New Zealand customer team IMS also scored a second place at the beginning of the North Island Endurance Series. At the three-hour race on the Hampton Downs circuit about 70 kilometres south of Auckland, the gentleman drivers Andrew Fawcett/Sam Fillmore finished second in the Audi R8 LMS of Lyall Williamson’s team.

Successes in America and China: The first generation of the Audi R8 LMS remains successful in club racing in the hands of customers. On the fourth race weekend of GT Sports Club America, James Sofronas from GMG Racing won the first race with a six-second lead over Jason Daskalos. Both relied on the Audi R8 LMS ultra on the Austin circuit. In the second race, Daskalos repeated his second place. On the second race weekend of the ZMA racing series in Zhuhai, South China, the STS Motorsport crew achieved a 1-2 victory. At first, Chen Yinian was leading, then Yang Baijie overtook his teammate when they began lapping slower cars. He won after 15 laps with a lead of 1.3 seconds.

Third win of the season for the Audi RS 3 LMS and lead of the standings: In Italy, Audi’s entry-level touring car remains on course for success. Eric Brigliadori celebrated his third overall victory this year in the Italian racing series, which has a strong field of 25 participants, at the fourth race weekend of TCR Italy at Vallelunga. The young driver of the BF Motorsport team took the lead of the race from grid position one and did not relinquish it until the eleventh lap. A red flag after an accident ended the race prematurely. Brigliadori made the leap to the top from third place in the standings. After four of six race weekends, he leads both the series’ overall standings and the junior classification. The Audi customer team BF Motorsport is also leading the team classification.

The seventh podium results in Russia: Aleksej Dudukalo remains best Audi privateer in TCR Russia. Initially, the Russian from Lukoil Racing had led the first sprint on the sixth race weekend. On the Nring near the city of Nizhny Novgorod, he had started from pole position in the Audi RS 3 LMS and controlled the race even when it started to rain. Three laps before the end an opponent overtook him and Dudukalo crossed the finish line in second place. It was already the fifth podium place this season for the 43-year-old veteran. After two victories, two-second places and one-third place, the Russian lies in second place in the standings before the finale in Fort Grozny in October.

Class success in China: Team TSRT achieved a class win at the second round of the Zhuhai Motorsport Association (ZMA) club sports season. Liang Yongchao in the Audi RS 3 LMS decided the A5 class for himself and achieved fifth place overall in a field of eleven participants.